Call for a free consultation

John M. Cook III of Houston, TX has been honored with a recognition by H Texas in its selection of “Houston’s Top Dentists 2017.”

John M. Cook III commented on the recognition: “This is quite an honor for me. The fact that H Texas included me in its selection of ” Houston’s Top Dentists 2017,” signals that my constant effort to deliver excellent work has paid off. It is gratifying to be recognized in this way.”

About John M. Cook III: a short profile by and about the honoree: Dr. Cook has practiced Cosmetic, Implant, and Family

Dr. Cook has practiced Cosmetic, Implant and Family Dentistry in Houston for more than thirty years. He is well-known for his kind manner, gentle touch and exceptional care. His office is located in the Green Bank Building at 7500 San Felipe, Suite 850, near the intersection of San Felipe Street and Voss. 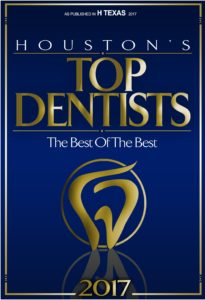